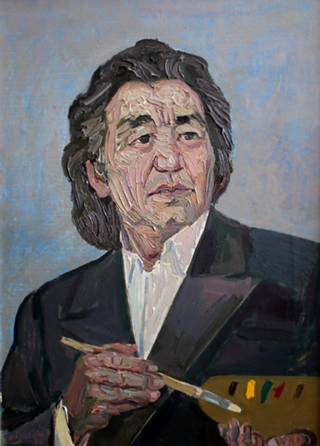 Zhanatay Shardenov, National Artist of Republic of Kazakhstan, was a member of Artists' Union of the USSR and received the title of Honored Artist of Kazakh SSR. He is the one of the leading landscape painting masters in Kazakhstan. His works are notable for the integrity of original vision and expressions of nature and the world around us. Zhanatay Shardenov's artworks, eventually, had received special attention of appreciators of the Kazakhstani Arts. This growing interest is due to the unique artist's temper reflected in each brushstroke or stab of color.

Zhanatay Shardenov was born on 4th April 1927 in Kovylenka, a village in Tselinograd Region (now Akmola Region), into the family of a cattleman. He took his last name from his father, Sharden. A nomadic hard-living lifestyle and illnesses have become a big trouble. He was the only survivor from a large family: his father died in 1940, his mother died in 1941. Later Zhanatay was brought up by his uncle, his father's brother. He spent his childhood helping with the housework chores: work on the fields, grazing activities. His childhood was hard with cold and hunger, but he found a faourite part in the midst of chaos.

The first drawings were created in the sand by a twig. But later, he gained attention in Kovylenka village. For the drawing untitled 'Chapaev' he won a grand prize, a piece of red cotton, at the district competition. In those years a commission was looking for talents in villages and district centers and noted the young artist's skills. And then, Zhanatay Shardenov was sent to Alma-Ata Art College under the guidelines of the local party committee.

The period from 1943 to 1949 was remembered by him fondly, despite wartime difficulties. He created his own genre, met his love and found a family in the wonderful city at the foot of Alatau.

His teachers included the masters A. Cherkassky, L. Leontiev, A. Bortnikov. During his studies Zhanatay Shardenov have received understanding from them. Those years were a period of professional development. The lessons played a crucial role in the young artist's self-identification. Zhanatay was always thinking about Abram Cherkassky, one of the founders of Post-war Kazakhstani Art, appearances together for studies and talks in a workroom with a view of gardens and mountains. The young artist discovered a landscape painting on the basis of Cherkassky's lessons. This genre became almost the only one for Zhanatay Shardenov.

After his graduation from Alma-Ata Art College in 1949, Zhanatay Shardenov became an active participant in artistic life of Kazakhstan. He participated in city, national and All-Union exhibitions. He was sent to Ilya Repin Leningrad Institute for Painting, Sculpture and Architecture in 1954 for further studies as a guest student and the Ministry of Culture of Kazakh SSR scholar. He visited all museums and galleries, took a closer look at works by impressionists. He had some rough times during studies at Ilya Repin Institute. His pecuniary situation was often straitened in that period, despite a scholarship, so he had to moonlight as a porter at one of the stations. He has been sketching by pencil in his spare moments impressed by impressionism masters. 'The way to the pinnacle of art is hard. I've been going through a rough patch, but I have no regrets', he often jokingly talked, looking back in his life.

In that period he found his favorite motifs; figurative thinking, compositional solutions and complex factures have developed. Comprehending materials, he admired by different forms and colors of nature, repose and contrasts, proportionality of details and integrity. An emotional strength of composition in his works conveys conditions of any landscape. Experience and skills allowed Zhanatay Shardenov to experiment on tinges in perception and transferring the changeable spiritualty of nature state. Movements of his brush in color mixing of pastose technique are confident. Wide and mellow brushstrokes join the tinges into illumination. Shardenov's color in mountain landscapes is immeasurable. It sparks like a snow shining; it is remarkably decorative in transferring colors of fall season or sundown.

In 1961 Zhanatay Shardenov was admitted to the Artists' Union of Kazakhstan. The artist, enthusiastic about work, he often went to the mountains and out of town. Sometimes he visited dachas of the Artists' Union members, constantly drawing. He'd always come back with paintings, sketches and studies.

But in a period from 1960s to 1970s landscapists were overlooked. Creative people had to praise the parties and socialist transformations' growing. Zhanatay Shardenov wasn't so active and interested in. He painted that scenes to earn money for his family, but work on it proceeded slowly; he worked without any inspiration and didn't want to think about this period later. Zhanatay saw a future for himself in drawing nature. Working in that direction, he formed his own style.

A significant part of Zhanatay Shardenov's works are urban and industrial landscapes. They have peculiar plastic forms painted a full and vigorous brushwork. The master uses and highlights an unexpected contrast of scales, static and dynamic compositions. It contributes to the spectacular contrast of dark shadow figures of buildings and bright stabs of color of autumn leaves or white snow and the serene azure of the infinite skies. For the painter who feels a connection between human and motherland, it's natural to resort to narrative paintings with a landscape elements and civism combination. In that way, the artist looks for monumentality, image composition and range of colors integrity. The main concept of Shardenov's works is a pictoral plastic metaphor. Lush oak trees, autumn-colored poplar and birches in wintertime are magnificent through the range of colors and materiality of the facture. 'The Winter Birch' shows us the impasto mass creating a giant trunk which seems unable to stay within the canvas edges. There is a glossy facture effect, fantastic image of wood branches and magical glistening of silver-white rough bark and snow. A tree with lush branches and strong trunks is like a symbol of life or a link between the skies and ground. Zhanatay Shardenov's works are special by exceptional pastose technique with broad strokes; everything is filled with lightness and swiftness. Zhanatay Shardenov's foreign counterparts compared him with Vincent van Gogh and called him Kazakh Chardin, compared with Jean-Batiste-Simeon Chardin, a French painter of 18th-Century. 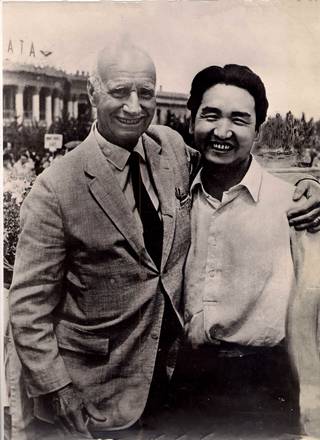 The features of his art vision were welcomed and considered Rockwell Kent, a famous American painter who visited Alma Ata in 1962. He was an important expert to Zhanatay Shardenov, so that meeting was remembered by him forever. Rockwell Kent visited the Exhibition of Alma-Ata Artists' Works in The Kazakh Art Gallery, and he was asked to choose an artwork as a gift. He picked the mountain landscape painting by Zhanatay Shardenov without any hesitation. The picture shows us ice caps of Alatau mountain range and shining golden sun. Rockwell Kent was invited to Zhanatay Shardenov's workroom; then Shardenov gave him two more landscape paintings. His works were fully appreciated and understood. That meeting and their picture together were a source of pride to him and his family. After the meeting he confirmed what he was on the right track. Later, in Moscow, Zhanatay's works were commended by Martiros Saryan, a famous artist. The acceptance has become apparent and long awaited for Zhanatay. All people who didn't understand his manner had to see his master skills following Saryan's opinion.

'This manner allows me to express the visual perception of the world and feelings which exist in nature', he said. Zhanatay had sincerely hoped that Paris public will see his works, and it was happened. In the days of Mukhtar Auezov's anniversary, Zhanatay Shardenov's landscapes were the main exposition of the Fine Arts of Kazakhstan Exhibition in Paris.

The period of 1970s was an important stage of his work. He often traveled around the country; did some paintings of Karaganda Metallurgical Plant employees, which is also known as Kazakhstani Magnitka; made a few dozen sketches.  Also, he travelled to Karaganda, Kokshetau Region and Borovoye Resort Area; he held an exhibition of his works there at the request of the management. These works were also created at the lakeside resort. Later he visited Baltic States and The House of Artists' Union of USSR Creativity in Palanga: 'Klaipeda', 'Palanga' 'The Bay', 'Baltic Landscape' works were painted there. In 1981 he was declared as Honored Art Worker of Kazakh SSR and awarded the Jubilee Medal For Valiant Labour. In 1987 Zhanatay Shardenov has received a Certificate of Merit from Supreme Council of Kazakh SSR.

Zhanatay Shardenov's works related with his personality. He was a cheerful open-hearted person, so people were drawn to him. He had given more than 50 years of the life to his work. Zhanatay Shardenov created more than 2,000 landscapes, portraits and compositions maintained by museums of Kazakhstan and other counties.

On March 24, 1992 Zhanatay Shardenov was declared a National Artist of Republic of Kazakhstan title. It was a welcome acknowledgement for his work and contribution. Many guests and delegations have visited that ceremony. He was full of emotions and said he must work more, and it allows us to realize a sense of the fragility of our existence. Zhanatay Shardenov came up the hard way, but was unable to get over the joy of acceptance.

Zhanatay Shardenov died on March 29, 1992 at the easel en plein air in Medeo natural landmark. He was born to be an artist, he died doing his duty. Nobody knows what really happened; he left his place one early morning and never came back. His soul stayed around where he always wanted to go; he loved the mountains turned out to be his final place. Zhanatay Shardenov's works make it possible to feel the creative perspectives, desire for harmony and nature, love and admiration of the motherland.

Travelling in the world of mysteries and magic, the true artist rips off the everyday life scales covering things, and gives us his own world. His sublime and deeply spiritual world filled with insight into life.

We have 190 guests and no members online

WE ARE IN SOCIAL NETWORKS